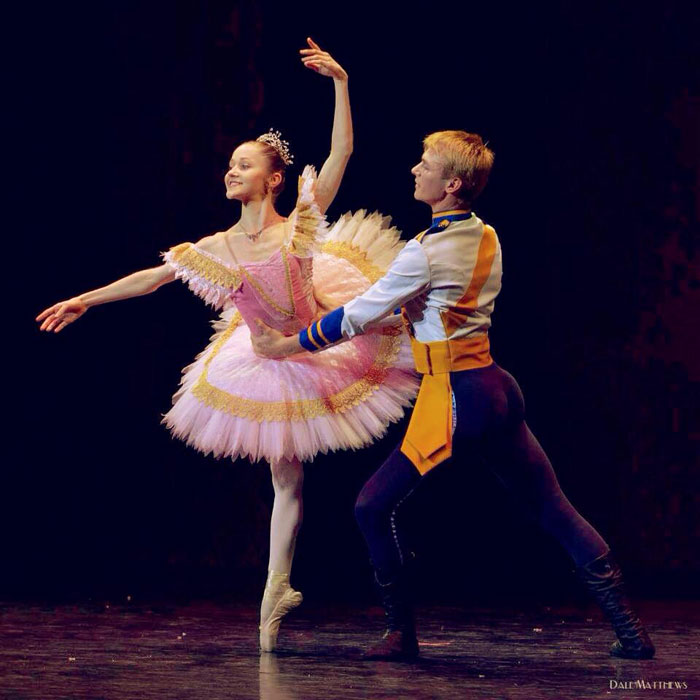 In December 2013, Sam Jones &  Jenny Hackwell were given the unbelievable opportunity to perform the ‘The Nutcracker pas de deux’ a classical ballet dance for the Sugar Plum Fairy and Prince Coqueluche in the ballet at the Louisville Palace in Kentucky, USA to a 3 time SOLD OUT theatre in Downtown Louisville.

Both Sam & Jenny were invited to Dance the spectacular performance of ‘The Nutcracker in a Nutshell’ by Denise Gillman, the Principal of ‘Denise Gillman’s Dance Academy’ based in Louisville. A sub-company of GDA is M.A.G.I.C. Productions.

After many rehearsals with Kate Simmons, Principal of KS Dance, Jenny and Sam flew to Louisville for a few more days of rehearsals. Jenny took on the role of The Sugarplum Fairy and Sam was cast as The Nutcracker in Act 1 dancing a sword duel with a mouse king and many mouse soldiers where he then became The Prince which closes Act 1.
Act 2 of the show took place in the Land of the Sweets, where the company take on the various divertissements to entertain Clara including The Spanish Dance, The Arabian Dance, Little Bo Peep and of course, The Grande Pas De Deux involving The Sugarplum Fairy and The Prince.

Sam & Jenny were both superbly treated by Magic Productions and made to feel right at home, enjoying social meet ups with both production and company members. Audience members were also able to attend a ‘Meet and Greet’ evening with the cast, receiving the company dancers autographs in which both Jenny and Sam were in high demand of, enjoying pictures together and a spectacular evening meal.

Dance companies and their communities

After the final show, it was arranged to grant one wish to a child from the ‘Make A Wish Foundation’, plus a ‘Mini Wish’  where Sam and Jenny signed a pair of pointe shoes to give to the child as well as a full-size promotional poster of The Nutcracker In a Nutshell production signed by the entire cast.

Both Sam & Jenny loved every minute of their dance performance experience in Louisville, USA and take this opportunity to thank Denise Gillman & Magic Productions for the invitation to dance with such a fantastic company.

We were welcomed during every minute of our stay, and the parents and children of Magic Productions and Gillman’s Dance Academy treated us unthinkably well.